Whilst I have lived in Japan for (only) a year now, I am sure there is never a perfect time to wade into another country’s social politics. For it is always a fact that you are an outsider looking in, someone with a completely different frame of reference, a different set of biases; and therefore it’s always a judgmental position to sit in. However, it is difficult to sit by on your hands and to know how you can contribute even in some small part.

Each country has their share of barriers to woman’s rights and inclusion, indeed as I watch on from outside I see the very public debate raging internally regarding the staggeringly high rates of domestic violence in Australia. You only have to scan the headlines to see it is no secret that Japan is struggling with the issue of empowerment and inclusion of woman as well.

According to the World Economic Forum’s annual gender gap report, Japan sits at 101st (moving up from 111th when Shinzo Abe began his premiership in 2012). But while more Japanese women are entering the workforce they’re falling further behind in wage equality, access to managerial jobs and numbers in technical fields. The rhetoric from the government continued this week as Prime Minister Abe backed out of his targets for woman in senior leadership roles, downscaling the target from 30% to 7%.

On the outside Japan’s inclusion figures don't look that bad, but the idea of ‘symbolism’ also props up the perceived gains made, as Japan games the system in more ways than one. As Jeff Kingston, head of Asian Studies at Temple University says “all the hype about more women working overlooks the fact that most of these are non-standard jobs with low pay, little job security and limited career prospects.” The UN estimates that its costing Asia as a whole $89 billion USD in lost productivity and so to corporate Japan I say, isn’t it just good business sense?

Results from the OECD suggests that the perception gap is wide, when interviewing male employers why their females employees were not promoted they answered ‘because they didn’t want it’ or suggested they did not have the ambition their male employees had. Conversely, a large proportion of women interviewed said they had left their role because they were not challenged in their lower level jobs, and indeed others left due lack of support for child raising. Coupled with Ministers publicly lambasting the calls for adequate childcare as woman shirking their responsibilities as primary child carers, is it little wonder woman may feel the need to give up isn’t it? The paradox in social narratives on woman’s issues runs deep through society and is something that is not going to change over night.

And yet the OECD statistics are staggering. Japan has one the highest number of tertiary educated women in the world, with only 38% percent working after they have children and sleep the least in the world, averaging only 4 hours per night. As someone who needs my sleep my head spins at the thought; only last week a friend told me she fell asleep at the wheel because she doesn’t sleep enough, run ragged all day with the high expectations placed on herself as primary care giver in Japanese society. While male partners are expected to work or put in face time late into the night every single night of the week (also a tough ask), Japanese women make the world go round, all whilst managing to be the most elegant and poised women I have ever had the pleasure of meeting.

I have spent time speaking to many women here, from Japan and abroad, having attended a number of woman’s leadership conferences in Japan and met outstanding women in all their fields. Some stories, like Sayaka Okasabe who took on the issue of Matahara (maternity harassment) in Japan made me cry and some just make me furiously mad. Most conferences spent huge amounts of time discussing how women must come together, support each other and speak up - something that is perhaps harder in a country that highly values conformity and harmony above all.

So whilst I am not a Japanese woman governed by Japanese cultural and social expectations, I consider how I as an Australian woman living and working in Japan can contribute in some small part.

From the conversation I have with a friends at the play park to the young women I work with, ask their opinion and listen to their responses and talk about the challenges that universally we all share to some degree. My Japanese friends have been surprisingly open with me; perhaps things can be said to me that they wouldn't dare whisper in Japanese to their other friends.

Advocate for women (all women, no matter their choices in life)

Whilst I am a working mum, all women have the right to design their own life; a choice to marry or not marry, to have children or not, to be a working mother or a homemaker or to make a life with the woman you love. Be that person who takes a stand, who challenges others in the workplace or beyond and opens up the world of possibilities to others (even in your own small way). Take someone’s hand and help them find their way.

Challenge others around you

Whilst my husband is my biggest supporter and fan in both career and life choices, he (as a President of a company in Japan) has received his fare share of preaching around the dinner table. As a male in Japan, he is only vaguely exposed or attuned to the news and the conversations I have on a weekly basis. So I see it as my duty (bless him) to send him information so that he too can carry this forward in his work, in how he manages his teams and how he tackles these issues within his own organization. Certainly, in Japan more than some other places male advocates are needed to champion the cause and to break down the stereotypes.

Having grown up in a household that told me I could be who ever I set out to be, it’s hard to understand the opposite and indeed the female narrative in Japan, as mentioned, is paradoxical. Daughters of my friends aged 5 and 9 have huge amounts of pressure (and extremely late nights cramming, 6 days a week for months on end) to pass primary school exams to ensure entrance into prestigious Universities – offset with around only 60% of these women ever working once they graduate. I continue to try my best to see the world from their point of view (outstanding mothers doing the upmost best for their children) and to understand your own biases in a situation you probably are not fully equipped to understand or comment on.

Japan has countless amazingly successful and intelligent women who inspire me everyday to be better and do better in the face of adversity. So many people, both men and women already fight each day to change the situation but we continue to need around the globe great role models, of all ages, race and indeed gender to let their voices be heard. Stand up and make yours count.

Innovating in public sector organisations - finding a path amongst the rules

Design for Open Challenges - for On Think Tanks.org 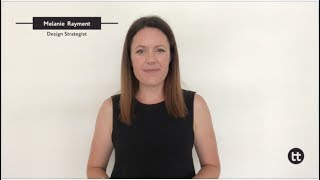 The business of service: Why think tanks need a service design lens

Workshop fatigue - the next thing in business

Intercultural communications and the launch of the UTS Japan Alumni Network